Looking for a needle for your record player or turntable? 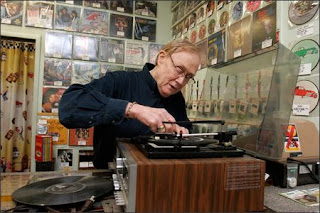 UPDATE: THIS WONDERFUL PLACE HAS CLOSED!!! But you can still read the article. Scroll to the bottom of this article for another wonderful place to have your stereo repaired.

This is where I go to for that hard to find needle or cartridge. You'll feel at home when you walk into this "Mom n Pop" shop and begin talking with owners, Jim & Sharon.

Many Seattle residents were born after phonographs had faded from common use. But even some of those whippersnappers find their way to JNS Phonograph Needles, according to Jim Goff, who has owned the Roosevelt District shop for 20 years.

"We get people of all ages, from pregnant mothers who want to play music for their unborn children to older people who still want to hear their records, and everyone in between," said Goff, declining to give his own age.


With his wife, Sharron, Goff runs what he says is the only business on the West Coast devoted to repairing electric-powered phonographs and selling needles and record-cleaning supplies.

Goff does the repairs on site, charging a flat $45 plus parts. If parts aren't available, he'll try to make them, and if the phonograph can't be restored to perfect condition, he'll at least try to make it usable. Estimates are free.

Some of the best customers are disc jockeys who use turntables to provide the scratching sounds common in hip-hop and rap.

Others are seniors such as Elmer Johnson, 88, who visited the store earlier this week.

He'd driven over from West Seattle to get his record player repaired. Goff found that it wasn't actually broken (no charge), and he sold Johnson a sapphire needle to get a better sound out of his beloved 78 rpm records ($21.76 with tax).

Needles range from $11 to $230, and Goff said he can find a needle for nearly every turntable, excluding those by Bang & Olufsen because the company no longer makes them widely available.

Sharron is responsible for the store's decor: pale green walls covered from floor to ceiling with old and obscure but never-played 33-rpm records.

It's fairly easy to find used versions of many of those records, but new copies are harder to come by.

Many are so-called picture discs from the 1970s and 1980s, which bear a large photographic image of the artist.

They're fun period pieces, particularly because the spindle hole always seems to occur in the worst possible place. One of Barbra Streisand, for example, appears to have a third nostril.

All of the store's records are left over from inventory the Goffs bought from Kay and Millard Smith, whose Standard Records store occupied that space for 56 years, until 1987.

The stock is 80 percent gone, and when it's sold off, "Well, we'll worry about that when the time comes," Goff said.

Goff started working for the Smiths in 1955, stocking shelves and opening mail in the record store. One day he started tinkering around with a turntable someone had brought in for repair and found he had a knack for it.

"I've been interested in that ever since," he said.

A significant percentage of the company's business is done by mail order. None of it is done on the Internet, as the Goffs don't own a computer and don't know how to use one.

They also don't own a fax machine, and they don't accept credit cards.

"I'm in the time warp of vinyl, and it works for me," Goff said.

Cash or checks only

The comments about this place are great!!