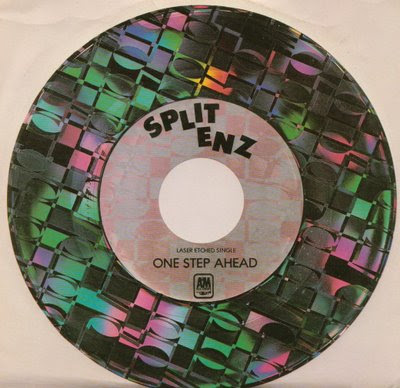 What can be said about this unbelievable group of the late 70's and early 80's that hasn't been said already? There will never will be another band like "The Split Enz! But of course, this has been said and I am know I am not alone in this opinion.

For me, I was so infatuated with the love songs of Neil Finn, but went crazy for brother, Tim's edgy rebelliousness. At the same time, I felt so deeply for what seemed Tim fighting his demons in his songs.

Now I know that the band was more than The Brother's Finn. According to wikipedia (and we know they know everything) the rest of the band included from March 1978 - May 1981: Nigel Griggs (bass) Malcolm Green (drums) Eddie Rayner (keyboards) Noel Crombie (percussion, art/visual director).

Today, both of the men are still unbelievable in their song writing with Neil coming out of The Split Enz, creating "Crowded House" and now on his own with whom I understand, his grown son joining him on tour, while Tim has also been touring on his own around the U.S. I am sad I missed both of their separate appearances awhile back in Seattle.

Eddie Vedder of Pearl Jam has said that The Split Enz is one of his favorite bands, covering "I Got You" while in Europe back in 2000 and appeared with the guys when he was in New Zealand years ago and from what I understand, appearing with Neil while he was in Seattle sometime after that.

All I know is; The Split Enz were IT for me!!

Coming from Palm Springs and never having gone to a concert, I wasn't sure how one did. But when I found out through L.A.'s KROQ that they were going to be playing The L.A. Palladium promoting their "Time and Tide" LP, I knew there'd be nothing holding me back, except maybe reliable transportation, which was quickly resolved by a nice boyfriend who lent me his 1978 3 speed Camaro. Problem solved!!

There we were, my sister Lynette and friend Julie. This was the biggest thing to happen in my life and I had to make it count. Going up front was the only way. Getting there very early helped, but once the other Split Enz affeciandos started turning up, it became increasingly difficult to hold our place up front as we were being pushed into the stage. But it was all worth it. I couldn't believe that when they came out Neil Finn was standing right in front of me!! And then Tim!! Wow!!!

This is during the time that "slam dancing" which might be a bit like "moshing" was popular. I got my look, I was close, but it was time to go! My 14 year old sister was only too happy to stay in the pit, but Julie and I went to the back. We were both shocked to see who was standing near us; Tatum O'Neal!

A favorite memory of that night was standing in the back with Julie and seeing my sister, Lynette being thrown out of the crowd with this crazy look of surprise on her face and her saying "Man, that was great! I'm going back in!!!" BIG SMILES!! We still talk about how that concert was probably one of the best we have ever been to. Was it because it was our first? Nyah! It was a good concert PERIOD! 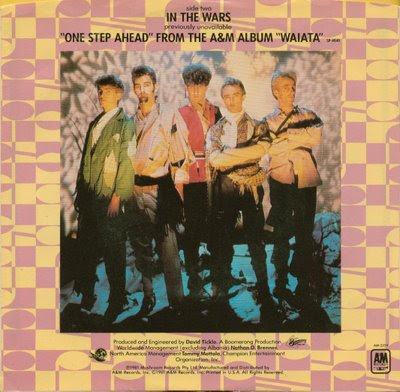 I found this 45 in a pile of records I had bought last year, forgetting all about them. Of course like the albums "Waiata" and "True Colours," it had wild, shapes and patterns covering the record with "laser etching" so when the light hit it, you'd see the design around the room. VERY COOL!!

The first is "One Step Ahead" written by Neil Finn. Yes, there are MTV videos on this, but I haven't seen any 45's playing on a turntable/stereo.

The next one is "In The Wars" written by Tim Finn which by the way, does not appear on the original album of Waiata, only on the Bside. But you will find it on the 2006 re-release, track 12.

Now I realize that these two songs would sound "way better" on a premium sound system, but when I was a kid and when you were a kid, didn't you have to play your favorite 45's on your mom and dad's old stereo or record player that was probably made in the 1960s? THAT SOUND in and of itself, brings back the memories!

And that is why there is "Spin That 45" for those who have their 45's and still listen to them.

AdviceMaven said…
I remember The Split Enz very well. I laughed about the premium sound system comment, because there is just something so wonderful about listening to music with that occasional crackling sound that you get from a turntable.

I guess it's the sound of nostalgia, but I feel bad for those that have only heard music on CD.

M.G. Goldsmith said…
Split Enz are IMHO, one of, if not the most underrated band I've ever heard. Their song writing was wacky and ahead of it's time, they were superb musicians who attained a reputation for being one of the greatest live acts in Australia and New Zealand in the 70's. They started so far out in left field but were just as good at writing mainstream and commercial songs. I actually prefer their first three albums above all others. The Brother's Finn are easily NZ's greatest song writing partnership of all time IMHO. The Enz were unique, mysterious, original, timeless and wonderful.
December 11, 2009 at 4:57 AM

Anonymous said…
I was at this concert, too. I can't remember who opened for them or what the date was. My sister and I at battling over a Time and Tide concert t-shirt that I know is mine. The date would solve it since she left the country after graduating high school in 1982. Thank you.
November 3, 2010 at 5:23 PM