MUTEMATH has struck gold once again!!! 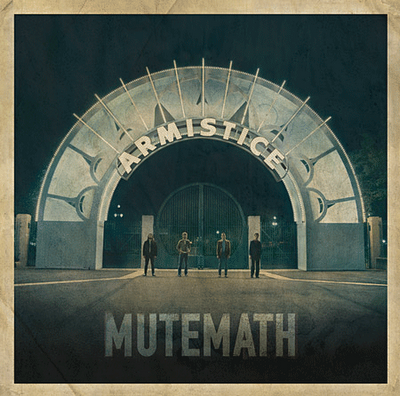 And from what I've read & heard, striking gold has had it's price. Alot of blood, sweat & tears went into this project and it shows. The LP is due out August 18th, just a few days from now. I've had the privilege of listening to "Armistice" from beginning to end. I seriously thought my ears were going to go insane by the various sounds I was treated to.

This is not a review, just a plug for a band I've been following from the beginning, particularly Paul Meany (vocals, keys & percussion) & Roy Mitchell-Cárdenas (bass, vocals & percussion) from their previous band and have seen these guys grow and mature in their writing and musical style. I am compelled, tho, to tell you that track 3 "Clipping" has enraptured me. For days, I'd been trying to figure what it was that was stirred up inside of me from the moment it began and tonight I figured it out. . . INTOXICATION. Wikipedia says that "Intoxication is the state of being affected by one or more psychoactive drugs." Well that is what I felt like. Mind you, I've never taken drugs, but I do understand the meaning.

"Clipping" although very profound & harsh in it's lyrics, definitely makes you feel like you are on a "trip" shall I dare say. From the moment it begins with the roughness of the moog bass sound, going in what seems a circular motion, pulling you in like a rope tied at your feet with someone pulling the other end, to guest artist, Jeremy Larson's beautiful, Siren-like strings at the interlude, reeling you in unawares and you don't care. With Paul Meany's voice crying out in pain and the "tossing and waves crashing," you feel your own pain surfacing and there isn't a thing you can do about it, you're going to erupt and let go of that feeling that has been buried deep inside for so long.

As always, this album is definitely "candy" to the listening ear. I also have to say that Greg Hill's (guitar, vocals & precussion) intros on several of the cuts are pure MAGIC!!! One thing about MUTEMATH is you can't figure out their style, you can never pin them down. One thing this album isn't, is Country. There is a however, a mix of R&B, Blues, Soul, Rock, Jazz, Punk, Techno, Euro, Disco & Classical. . . all their influences have been quilted into this project.

Our family has grown with the music of MUTEMATH. It has been amazing to see my children change in their tastes of music, but never in their love for the musical "chaos" of MUTEMATH. They have loved seeing Darren King go absolutely insane on his kit, drawing in the audience everytime. My daughter, now 15 has been listening to them since she was 10 and she just said recently that she never loved anyone's music like that of MUTEMATH, because as she put it, they sing the truth. 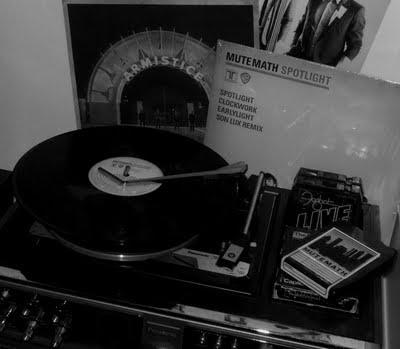 If only it were possible to release a few of these tracks on 45's, since AFTER ALL this is a blogsite for those who love their 45's. But I am happy to say that there will be a limited amount of vinyl available at their shows and as you an see from the picture above, their was an EP available back in the Spring.

If "Armistice" were available on 8-Track, here is what, I believe it would look like. 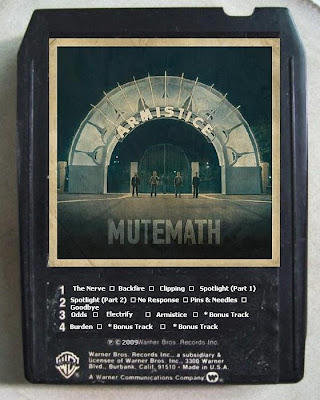 
"Armistice" is a classic and it hasn't even been released yet. Definitely make sure to check it out. You will not be sorry!

If you get a chance, a MUTEMATH show is not one to be missed. 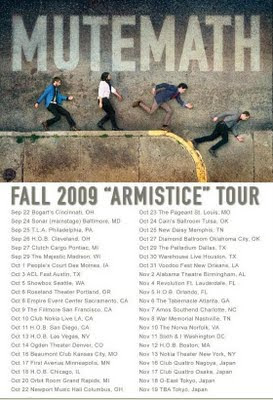 The Word said…
This album is amazing and Clipping is the most moving song on it.