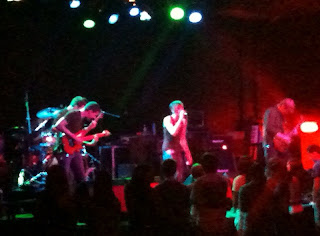 I had a very unexpected surprise when I went to see friends, SHERWOOD at The Showbox recently. There were supposed to be about 3 bands opening for them, but 2 or 3 more were signed up to play at the last minute.

Normally. . . when I go to a show, I wind up missing the first band, sometimes the second, mostly from being late. What made me want to be ontime this particular night, I have no idea, except that it was meant for me to be there. Also, my 12 year old daughters and their friend were attending their first show at The Showbox and we wanted to see all the bands.

The first band up, you just never know what they're going to be like.

I'm sitting in my spot, minding my own business, tooling around on my phone and the opening band begins. Of course, I have no idea who they are. But I have a theory. . . .by the first 8 measures, it's a hit or miss with me. It was a huge "hit" for me. . . especially since music of the genre being played is usually not what I would listen to. And if you've read my blog, you pretty much know where my preferences lie. 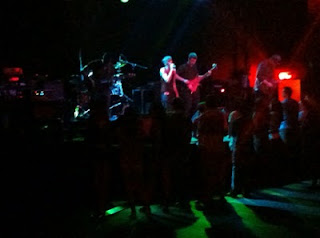 But when this band began. . . they caught my attention!! I looked up. . . and before I was aware, my head was moving to the rhythm of the bass & drums. I grab my camera to go down to the floor to get a closer look and take some pictures. 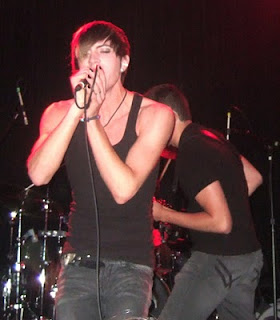 The lead singer, striking what I consider an "Iggy Pop" type of look (very cool), has the attention of those in front of him, tiny as the audience was, he is making contact with them. I liked his presence. The other guys in the band, were also very good at connecting with the audience. 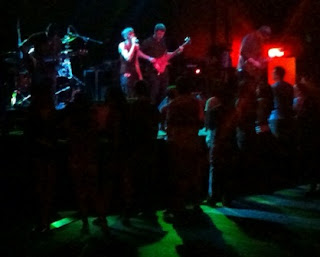 Who is this band? 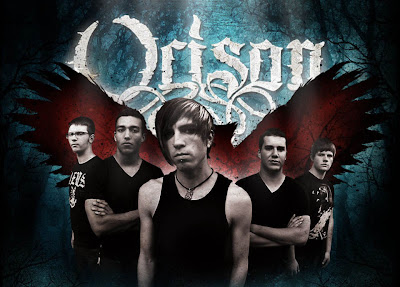 
And the music world is going to be hearing alot about them.

After their set, I had to go find them and meet them, wanting to encourage them to keep it up. WHAT A TRIP!!!! . . .after the introductions and "oh yeah, you guys are great!!," I find out that they've been practicing down the hill from where I live. . . so THAT'S what what they've been doing on Newport Way!! And the bass player of the band, Scott Boyd's sister has been friends with my daughter!! Small world!

I am so glad that I didn't know about them prior to seeing them, because I might have been biased and less discriminating in my opinions of the band and their music.

The band say their influences have been Tool, 10 Years & Breaking Benjamin. To that list, I would add; Anberlin, Hoobastank & Creed, which what my friends and family heard while listening the CD. I would also like to add that there is an 80's influence here, too.

From the moment I heard the first song, "Rebels Below The Waist," I felt like I was being taken on a ride! Great opening song for an EP or album.

I know that in today's world, it's all about downloading or shuffling a song list rather than listening to a album from beginning to end. But. . . I am old fashioned. I'd prefer to listen to an album from the first song to the last, and if I like it, I will usually start it over again, which I have done numerous times since the first listen of Orison's EP

It's an amazing feeling when you "sense" the instruments communicating with your soul.

And that's what I felt when I listened to "Inhale" at about the 3:30min mark. MAN. . . I feel the pull. "TAKE ME" is what is going through my mind. The singer in the group, Jacob McIntyre is so good at conveying his feelings on this tune. . . to the point that I am about to well up with tears at the end.

The musicians are just that. . . .musicians. I was very impressed by their skills on this album. They all play well. Great balance of allowing everyone to show off their talents. Cyril Silverman & James McDonald are on guitar, Scott Boyd is on bass and Brandon Thomas is on drums.

Overall, the album has a great sound to it. Signs of great engineering and that this was not a homemade album. Very well done.

I see amazing things happening for Orison.
They have, in my opinion, all the right ingredients to be a success.
I am so glad I decided not to miss their set that night.
It was also great meeting them and finding out what a bunch of nice guys they are!

And just so you know, guys, I'm hoping to have one of the first copies of your songs on a 45!! That would be a 7" inch vinyl.
Good luck to all of you!

Check out Orison on their Myspace
And their Facebook