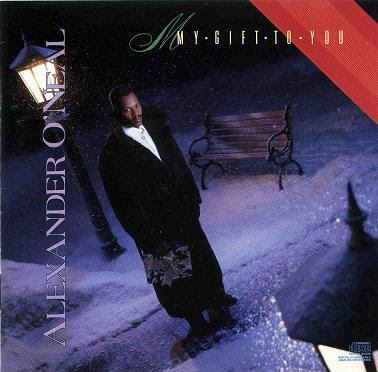 One of my favorite Christmas albums ever released has to be "My Gift To You" by Alexander O'Neal! This is one those albums that can be played from beginning to end. . . the way an album should be played.

Released in 1988, this album has stood the test of time. With iconic producers James (Jimmy Jam) Harris and Terry Lewis at the helm, it has all the makings of an outstanding Christmas albums. It rocks, it bumps, it's classic and classy! Alexander O'Neal is so versatile. He can schmooze and he can be humble, all with his tone. I believe him as he is singing his heart out!

My Gift To You

Sleigh Ride
CAN I JUST SAY THIS IS MY FAVORITE?!?! LISTEN TO THAT BEATBOXIN THE MC IS PUTTIN OUT! CLASSIC!! This is Jimmy Jam and Terry Lewis all the way!

Allmusic says this album is a "lushly romantic set considerably more thoughtful and heartfelt than your average yuletide cash-in. Half of the album's ten songs are Jam/Lewis originals, and even if none of them emerged as contemporary standards, they do a good job of capturing both the secular ('Our First Christmas') and spiritual ('Remember Why It's Christmas') dimensions of the season. O'Neal also delivers shopworn material like 'The Little Drummer Boy' and 'Winter Wonderland' with conviction, saving his most potent performance for the Donny Hathaway classic 'This Christmas.' There's no getting around the trademark Jam/Lewis production, though. My Gift to You is plainly a product of its era, complete with thick synthesizers and programmed rhythms, and is best enjoyed by listeners still hoping Santa brings them acid-washed jeans and Members Only jackets regardless of the year in question."

This is so true. This album is more than just a bumpin Christmas album. There's the message of hope and thankfulness with The Sounds Of Blackness lending their gospel choir talents to those songs. And considering the state our world is in, I believe this album and it's message is very timely.

I have always stated that if an artist is going to cover a song, it should be done right or not at all. Mel Torme's The Christmas Song sung by the great Nat King Cole, in my opinion could never be covered. And yet, I've always enjoyed Alexander O'Neal's version of the classic song, recorded in the same key with the intro the same as Nat's original. Lovely.

Winter Wonderland is super cool and jazzy. Very classiy "Big Las Vegas of the 60's" sounding!! I love it!!

If you haven't heard this album, it's available all over from streaming sites such as Grooveshark or even to purchase.

Take a listen. Trust me, you are going to love it.
It just might be your Christmas music stable, like it is mine. : )