Seattle's Super Jam puts the Squeeze on at The Triple Door

I've always been a fan of British New Wave, Pop band Squeeze. So it was pretty cool to attend the April 12th show at Seattle's Triple Door of the Squeeze tribute done by some fantastic Seattle musicians going by the name of "Super Jam."

The show was titled, “Super Jam Plays Squeeze” and was presented by Roseta Productions. Super Jam performed Squeeze’s 1982 hit album “Singles 45’s and Under” in it's entirety with a few extras thrown in.

If you are familiar with the Seattle music scene and you were at this event, then you might have recognized everyone in the band. "Super Jam" included members of "Apple Jam," "Lucas Field," and "80s Invasion."

There were a few guest performers as well which added to the great night of reflection:
KJR's Bob Rivers of the "Bob Rivers Show" was on keyboards and Cliff Colon on saxophone

First of all, I was overwhelmed by the audience! The place with packed! It was awesome! To be honest, I wasn't sure what to expect when I got there. It was cool to see the varying ages from young to old-ER : ) Parents bringing their kids to relive the 80's with them, just like I have with my own kids.

From the first song, "Super Jam" DID NOT hold back anything. You could tell they were so excited to be playing for everyone there and for themselves. Guitarist, Jakael Tristram had told me a couple of months back that he was a huge fan of Squeeze and would be doing this show with some great Seattle musicians who also loved Squeeze. So I know that when April 12th arrived, they would get to see the fruit of their labor. 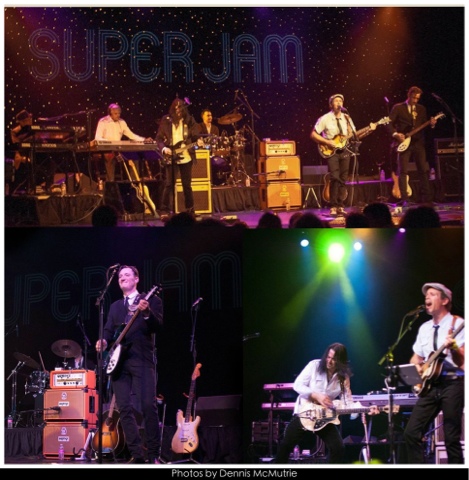 The reaction from the audience was exactly how I felt. . . Super Jam captured the essence of songwriters and members of Squeeze; Chris Difford and Glenn Tilbrook. If you closed your eyes, you could almost feel like you were back in those days of the 70's & early 80's when Squeeze performed.

Local Seattle artist, Lucas Field of his own band with the same name, came on stage and sang "When the Hangover Strikes" which was AMAZING!!! He was awesome!! I really enjoyed it. But when it came to his singing "Black Coffee in Bed," I have to admit I was a little bit disappointed. There was an iPad in front of the microphone so he could read the lyrics to both songs. And although he sang "When the Hangover Strikes" great with a very natural flow, "Black Coffee in Bed" sounded under rehearsed and a little bit like "Bandaroke." I also felt that the song was a little bit too high for Lucas, which made his voice sound a little pitchy. I believe that the song was better suited to Rick Lovrovich's voice.

Set 1 continued with
Slap and Tickle
Cool For Cats

The band took a break and came out to interact with their audience. It was great! They were glowing and it was obvious they were totally overwhelmed by the love and support shown by everyone. While that was all going on, I did talk with a mother and son sitting next to me and asked them if they were fans of Squeeze. The mother was, but her son really didn't know the music of Squeeze, but was a fan of 80's Pop / New Wave. I asked them how they felt about the show at that point, and they really loved it!

I then turned to a gentleman sitting next to me and asked him what brought him to the show. He said that he was also a fan of 80s pop and wanted to check it out. But I found it humorous that he normally attends operas. So that was pretty cool that he choose to check this out. 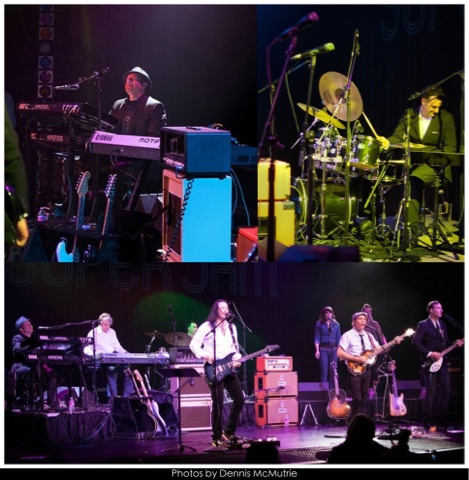 So now onto Set 2.....
Take Me I’m Yours
If I Didn’t Love You
In Quintessence
Labelled With Love
Some Fantastic Place
Hourglass
Farfisa Beat
I Can’t Hold On

Tempted, written by Paul Carrack who was part of Squeeze for a short time and recorded the 1981 release; "East Side Story" was done well with vocals by Jakael. Trivia....the LP East Side Story was produced by Elvis Costello and Roger Bechirian

The encore was incredible! If I remember correctly, it was "Another Nail in My Heart"
"Pulling Mussels (From the Shell)." I totally loved seeing the audience getting up to dance.

This was one fun evening! I hope that Super Jam decides to do this again. Once was not enough for me.

Thanks to Steven Roseta of Roseta Productions for inviting me to be a part of this.

There's some great footage from the show here.

Note: Check out the review on Examiner.com on "Super Jam Plays Squeeze."