It's always exciting for me to hear new music, especially when it's in my native language of Spanish, which unfortunately, I do not speak very well. But I love listening to it. Had an opportunity to listen to something that turned my head around from a group of guys out of Benidorm, Spain.
Mirza Zaza 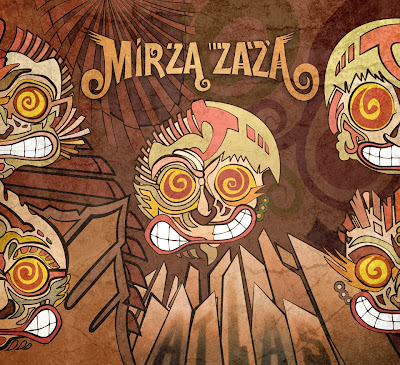 Their upcoming EP, "ATLAS" which is due to be released July 22nd is a must hear!
Let me introduce the band.
They are:
Jordi Cantó on Bass
Jorge Garcia on Drums / Vocals
Josema Torrente on Lead Vocals
Nando Díaz on Guitar / Vocals
Roy Mitchell-Cárdenas of alternative rock group; MUTEMATH was the producer of "ATLAS." In fact, Roy did more than produce this project. He programmed, wrote, engineered, and played on it. Being a long time fan of MUTEMATH, I could tell that this had a MUTEMATH flavor to it.
But don't expect it to be a MUTEMATH clone.
This EP stands on it's own.
The band released a promo video "Tu Voz" which I think I've listen to at least 15 times!


Wow!! So much going on. Guitarist, Nando sounds like he was going for that 60's vintage garage band sound. Or maybe it was Roy. Nevertheless, I LOVE IT!
It has a Lenny Kravitz feel to it.
IT'S EDGY!
IT'S SEXY!
And yet the song is talking about using your voice to make a change.


Put your headphones on, the ol'skool kind because you'll want to hear everything going on in the forefront and the background.


This is a really well done rock album. I may not understand all of the lyrics, but the music is taking me away.


"Contigo" is a song that Mirza Zaza recorded in 2011. I found a copy of it on YouTube.
Back then, the song had good bones. DEFINITELY sounds much better tho on this album! I'm glad they chose to record it. Drummer; Jorge and Jordi on bass are the driving force on this tune! Love the early 80's Rush or even "Rosanna" by "Toto" sound of the keys before the 2nd verse followed by the bass. GREAT!
I am freaking out right now as I listen to track 3, "El Último Baile." You think it's over and then there's this vignette of strings that is so lovely, but perhaps a little sad, like the ending of something special. I'd even go as far as to say; haunting.
"Perspectivas" is really rockin'. The groove of the verses reminds me of a little of Pop band, Fitz and The Tantrums. But then the chorus has what I equate to Contemporary Christian Music's DC Talk when they were rockin' their "JesusFreak" album! Bottom line. . . retro!
The last song, "Mundo de Papel" seems to be the ballad of the album. Lead vocalist, Josema, really shows off his pipes here proving, as my friends in the 'hood say, he can "sang." I would love to hear what else he can do in this arena.
Roy did a great job at mastering this album. Pure quality sound. So clear! Man!
But everything takes a village, right? Honorable mentions are Ender Thomas Zambrano, former singer for Yanni, and César Milano of Clear Tune Monitors also worked on this project.
Mirza Zaza is going to be a band that you will want to watch for!

Put July 22nd on your calendar and get this EP!