There are just no words to say how sad I am to learn of the passing of Grammy Award Winning musician, George Duke. He fought a courageous battle of chronic lymphocytic leukemia. At 67 years of age, he submitted to that disease today.

I hate that I am at this age to see so many great people I grew up listening to who contributed to forming my vast musical tastes, pass away like this. Unless the younger generation are musicians themselves, they will never understand what it's like to lose a legend like Mr. George Duke. He wasn't JUST a jazz icon. He is part of what makes R & B, Pop, Funk and Hip Hop what it is today!

George Duke was the epitome of the "musician's musician." His solo career was stellar. Never stagnant, he was always reinventing himself and giving himself to new styles of music working with the likes of Daft Punk, Ice Cube and others. His who's who in music, from the 1960's up to his passing is absolutely incredible, like Al Jarreau, Anita Baker, Aretha Franklin, Jeffrey Osborne, Jean Luc Ponty, Djavan, making music history with all including the late Michael Jackson. He can be heard on "Off The Wall" & "Girlfriend" from the "Off The Wall" LP.
Man, in listening to this right now, I am reliving when I first heard this song.

"Off The Wall" was and still is OFF THE HOOK!


My friend, bassist extrodinaire Carol Kaye gave me permission to quote what she posted about George today: "George Duke was a wonderful person, terrific Jazz Musician icon, and a hard-working traveling musician - always easy to work with in the studio at Fantasy, and a lovely man. A great family man also. This is wayy so young to lose valuable musicians who give so much....so many more could have learned from his professionalism. Touring is very hard on the body...those tiny airplane seats once you go through the stress of airports, getting gear handled, and then not having the time to eat right along the way....being on the road is harder than most know."

I asked her if there was anything else she wanted to say about this great man. She did!

Carol: "He sure had a sense of humor but even when kidding, he was still fooling around with substitute chord changes, always finding something musically new while kidding around....now that was a fantastic musician. You couldn't separate him from his music."

Checking out Twitter, I am overwhelmed by the tweets coming in, Here are just a few: 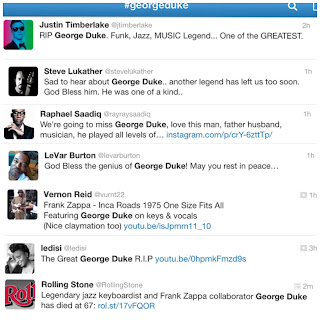 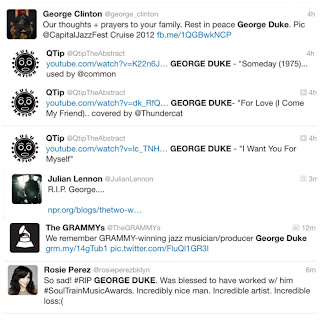 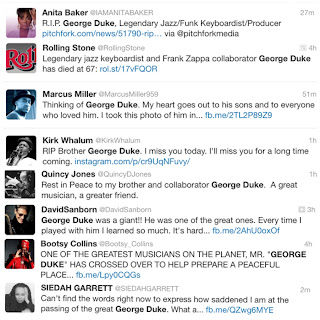 If you are reader of my blog, you know how much
I love Robert Glasper and his music. 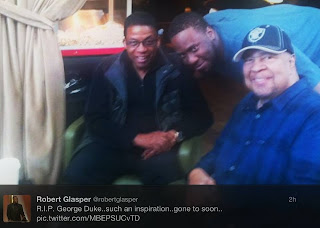 Was very touched by his photo tweet with George and another legend; Herbie Hancock. I have to include it.

I liked to share some of my personal songs that George was either on or were from his solo projects:

I am a huge fan of Brazilian artist Djavan. One of my most treasured songs is "Miss Susana" from his 1987 release "Bird Of Paradise" On this song, you can hear George's piano so clear making the mood of this song so sad and yet yearning and wanting that unrequited love.  Beautiful.

Of course there are so many songs to choose from. I wish I had more time and room. I will leave you with these last two.

PBS Legends of Jazz - George Duke, Lee Ritenour, & Marcus Miller
George is tearin it up with guys including drummer great; Vinnie Colaiuta with his song; "It On!"


Lastly, George talking about his latest release "Dreamweaver." He is saying "goodbye" folks, ending the album with a very smooth "Happy Trails" written by Mrs. Roy Rogers, Dale Evans. But as he says about this album, it's not suppose to be a sad album but a celebration! And it is.

Thank you, George for giving us your best, even up to the end.

Your work will never be forgotten.

You will never be forgotten.