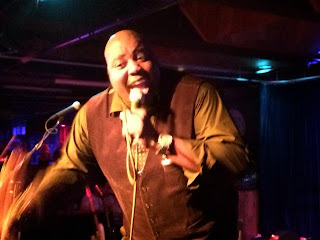 Ending an 9 day tour and what he called; barely able to sing, Sugaray Rayford, of The Mannish Boys showed everybody how blues is supposed to be sung. And seeing him at Highway 99 Blues Club in Seattle, Saturday night, Oct. 26, 2013 was the place to see Sugaray tear the roof off that sucker with a sold out crowd ready to cut a rug on the dance floor or move in their seats or just dance and sway in their happy spot. 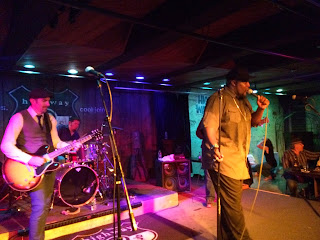 Highway 99 Blues Club is definitely "thee" place  hear the blues live.  The crowd was ready to get down, but I don't think they really knew what they were getting themselves into.

Talking to some around me, I was pleasantly surprised to find that several had come out to see him live because they'd seen him on Youtube. They did know about Kevin Selfe and The Tornadoes. What a band!


Figuring that this is how he was discovered by blues lovers up here in the Northwest via Youtube, I figured I'd write less and show you what I recorded instead. With Kevin Selfe and The Tornadoes setting the tone, you will see he is dead serious about getting down.  You might even see him twerk a bit. Dang, the man can move!


You know you feelin' the love when Ed from Highway 99 comes up to bring you a tray of red beans and rice with some cornbread!! Ha!! This was great because Sugaray was telling us all about it before Ed walked up!! GREAT! Oh and don't mind me. . .I'm just singing with everyone else and that's how Sugaray likes it. . . group participation.

A beautiful rendition of a Son House classic, you get the feeling that you are sitting on a front porch somewheres, listening to a man moan for his love while his friend Kevin also makes his guitar moans with sadness.

Sugaray is one of the most powerful blues singers alive. He can belt it out, with feeling! He's a talented blues man who is one of those rare and true embodiments of the authentic blues singer - and his wild performance and emotional delivery makes that obvious. His pairing with Kevin Selfe was a great combination; the entire band was having a great time on stage and Kevin was just ripping it up on guitar.  If you're a guitar player like my husband, put him in your "must see" list since he's got the chops and the feeling to go with it.

If you haven't heard it, check out his new album, "Dangerous" which I believe is out now. 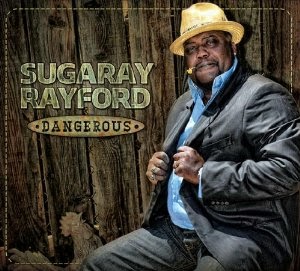 From the reaction of the crowd, I have a feeling it won't be too long before we see Sugaray Rayford up here again.