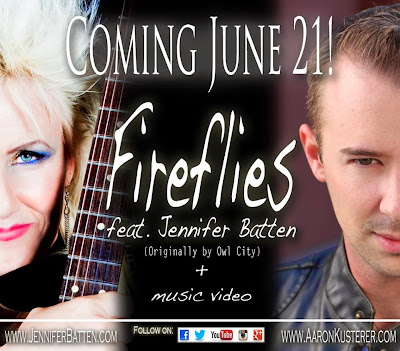 As a follow up to their last single together, The Melting Pot, Aaron Kusterer and Jennifer Batten have collaborated again to record a guitar-centric version of Owl City’s Fireflies. As a bonus, Batten and Kusterer are also releasing a companion music video.

When asked about the project history in a recent interview, Aaron stated, “Jennifer told me at one point that she really liked the song Fireflies . . . it kind of grew on me. So I thought, let’s just do this.”
“While making my own arrangement, I wanted to be sure to give a tip of the hat to the original,” said Aaron when asked about the guitar-centric nature of the cover. “You’re not going to find a lot of fast guitar playing in this thing.”

The Fireflies cover will drop in the US on June 21st along with the companion music video. The video will be available worldwide via YouTube. European download release dates to be determined.
You can read more on the project and get a sneak listen of the track on the Fireflies Info Page.