Shonlock's Gotta Bag Full of Swagga & U Can Bet Ya House On It!!! 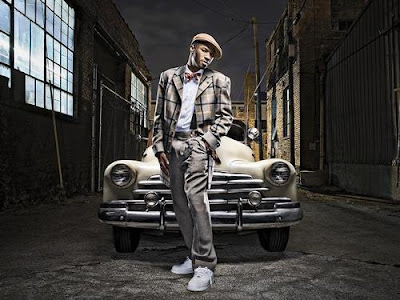 (NASHVILLE, Tennessee) -- When Shonlock’s full-length debut release NEVERODDOREVEN (Arrow Records/Universal Music Christian Group) was released on June 21, 2011, the artist, previously best known for his ongoing gig as part of TobyMac’s Diverse City, stepped up to a mic that was all his own. With the success of his first two radio singles and an increased demand for touring, Shonlock will depart from TobyMac’s touring outfit at the end of this month to devote his full attention to his own artistry.

Shonlock’s debut single, “Something In Your Eyes,” became one of this year’s biggest radio hits, holding the #1 spot on Billboard’s CHR Chart, where it remained for seven straight weeks. The follow-up single, “Hello,” is currently #5 and climbing, and a music video will be shot in the coming weeks.

With a lengthy tour schedule for the remainder of 2011, Shonlock will next hit the road on this fall’s “Outta Space Love Tour” with Group 1 Crew, Rachael Lampa and Rapture Ruckus. He spent the summer performing at major festivals, including Creation East, Creation West, Ignite Festival, Heaven Fest and Rock the Desert.

“My band and I have been invited to a lot of festivals, and the crowds have been amazing,” says Shonlock. “It feels good to be able to share what God has given me with such large and attentive audiences. It’s fun to see the reactions people have when they finally put the face with the songs. I love it!"

The excitement about one of Christian music’s most promising new artists extends to the media, where the reception has been overwhelmingly positive. “The acclaimed choreographer (Arrested Development, Aaliyah) turned member of TobyMac’s Diverse City Band is even more talented as a solo artist, dropping one of the rap/rock scene’s most compelling concoctions this year,” said Andy Argyrakis for television network GMC’s Web site.

“If one had to name the freshest urban Christian music album so far in 2011, this one’s a lock,” said mega-site Crosswalk.com. According to TheBlackGospelBlog.com, “Shonlock may well be the breakout Christian artist of the year," while JesusFreakHideout.com declared the songs to be “extremely creative and some of the best musical artistry that I've heard in a while.”

“At the end of the day, I just want to fulfill the plans that God has for my life,” says Shonlock. “I want to use everything He's put in me to point people to Him regardless of music genre or ethnicity, and remain focused on the things that bring us together rather than the things that keep us apart."