Aaron Kusterer is fluent in the Language of Emotion 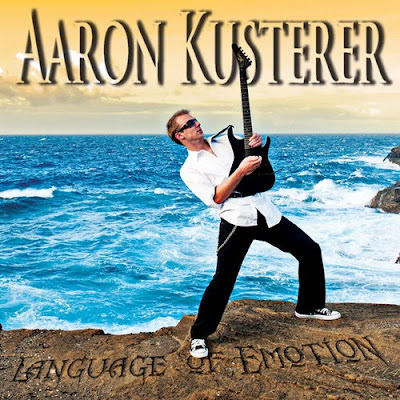 I love that feeling when the music totally moves you from sways to getting deep inside the soul and unleashing emotions buried.

Aaron's latest release "Language Of Emotion" is definitely the guitar lover's LP!! Lots of influences here, i.e. Joe Satriani, the "Steves" . . .Lukather & Vai and one of my favorites; Lee Ritenour.

This album, Aaron's 2nd release is a very sophicated effort without being stuffy. This is not a show off, "see what I can do" album. Aaron is definitely fluent in his skills and he just wants to communicate what's on his mind. He's taking us on a journey and he wants you to sit back and take it all in.

Listening to his album over and over, I can't help but think of the scene in "The Benny Goodman Story," where Benny asks his girlfriend to marry him by playing his clarinet towards her while also doing a show. He asks her this way because he can't verbally do it. She understands this and accepts. In listening to track 4, "No Feeling Left," I could totally feel what Aaron was conveying. What a rush!! I've not only been there, but I have some family and friends who are in this moment. "No Feeling Left" seems to describe the problem . . . THAT RAGING BATTLE, but also, I feel, gives the solution. . . HOPE!
GREAT SONG!!!

6. Deeper than the Unknown


I love that Deep Purple "Smoke on the Water" like intro on "Throat Full of Nails" with the heavy Hammond B!! Very solid! Love it!!

"Deeper than the Unknown" has that jazz fusion feel to it with a flavor of George Harrison's sitar. Very nice. Makes me think of Jeff Lorber's early LP's.


MAN!!!!!! I AM IN SHOCK!!!! Azure (Acoustic Intro) takes me back to those early days of record label, Windman Hill with Alex DeGrassi and William Ackerman. I had to listen to this over and over!!! Almost made me cry like everytime I'd hear Alex's "Western." UNBELIEVABLE!!!

And THAT is what I think music should do to us. . . move us, get into those hardened walls of our hearts and tear them down, exposing it and bringing it back to life.

I also have to add that the intro reminds me of a friend who has left us. . . Roby Duke.
He'd like this!

Azure (Acoustic Intro) moves into what I imagine it would be like if Phil Keaggy & Richard Souther got together and recorded Azure.

"Language Of Emotion" is a solid album from a solid artist!!
I can't say enough about it. You just gotta listen.

Kurt said…
Aaron is super talented and a great guy. Check out our article on him at Six String Theories...