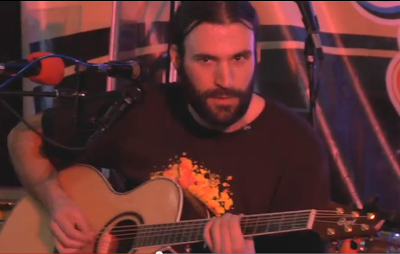 Before leaving for California for the National Association of Music Merchants (NAMM), I was researching the The NAMM Show schedule to get in order of what to see, who to see, etc.
If you've never attended The NAMM Show, then you are missing out on one of history's greatest trade shows ever!!

For about 2 weeks, as I was going through the schedule of performances and events, the name "Dustin Prinz" kept getting my attention. He would be playing a noon set at the Marriott that weekend. Did I go see him perform? NO! But fate was going to have it's way, no matter what!

With friends on one of the evenings, I saw a presentation on a film that would be released soon called "Haiti 10," which renown bassist, Victor Wooten had written the score for.
I will definitely be talking about that in another blog. But for now. . .let's go on. . .

Was I shocked? UH Yeah...in my mind. But if I showed it, I don't think anyone there even noticed, since unbeknownst to me, being the last one to the table, everyone was just grateful that I wasn't this creepy guy that kept eyeing the very chair that was saved for me, hoping to sit there! My fashionably late self was a welcomed site! HA!! 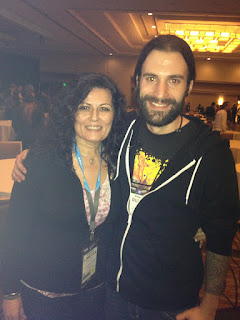 We all talked a bit before and after the film presentation. I found Dustin to be a very cool guy. Getting to know him a little, I found he is a huge Beck fan. And he is an Nebraska native, who currently makes his home in Oklahoma. Several times during our conversations, I was strongly encouraged by his manager, Chris Harkness to check Dustin's website out and listen to him, because Dustin was a talent. And to be honest, when someone tells me that I need to check a person's music out, I think I put that "Oh No" wall up. (Sorry, just being honest). Well I took Chris's advice and went to his website that night in my hotel room. WOW! I am soooo glad I did! Thank you, Chris for being persistent! You have great insight!

A huge thanks to Josh Vittek of Dean Markley Strings, for inviting Dustin to his very first NAMM Show to perform. I suspect this will not be the last time for Dustin.

As Levar Burton would say, "But you don't have to take my word for it."
Check out Dustin's documentary on his NAMM adventure.

I have watched this video several times. He is amazing.
I found myself laughing out loud as he sang his songs on being Bipolar and making all those doctor appointments. I could totally relate to that!
Check out the usual stuff, his website, YouTube, his Facebook, Twitter

And Dustin, I so regret that I did not catch your show live. Please forgive me!
You are awesome! Cannot wait to see where your journey takes you.