So many adjectives have been linked to him, from smooth, enticing, sexy, inspirational, magical, spirtiual, etc.

To that I would add, his music is “charged” with extreme energy!! Especially in the softness of his playing. He’s very deliberate, conscious and intentionally aware of every move he makes . . . .and. . . . NOT intentional...like “let’s see where this takes us” kind of mentality. And yet, you wanna go with him, cuz you know when he’s leading the way, it won’t be to a dead-end. And even if it does. . . who cares. . .you’re with him. . . 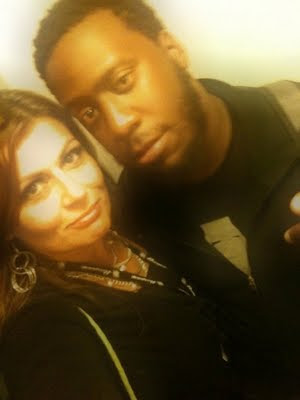 I am his prisoner

as long as he keeps playing

with a sense of humor,

breaking out in some

cheesy type of song or

breaking me down with

“Kiss From A Rose/Everything In Its Right Place.”

And so it was, when I saw him recently at the TD Vancouver International Jazz Festival at the end of June 2011, I was lost and under his spell. . . at least for the 2 sets I was there. : )

There is just something about Robert Glasper, whether hearing him live or through your stereo. . . you are hooked!!!!

Let me tell you though, there were very few empty seats in the house. . . for BOTH SETS!!!
I was surprised by the variety of ages and types of people there to see this man, who is very unassuming in presence. . . very relaxed. . walking onto the stage as if he’s just walking into his livingroom to play a bit and you just happen to be there.

The rapport these guys have is unbelievable!! It’s like they can read one another’s mind. It’s extraordinary to watch!!

You are taken on one heck of a ride !! It’s wonderful!!

Leaving, I was left with wanting more.

So I am looking forward to Robert’s upcoming album which will include Mr. Derrick Hodge, Bilal, Mos Def, Q-Tip, Erykah Badu and Me'shell N'degeocello. I am guessing the release will be sometime in Spring 2012.