THE COVERING BY STRYPER

- April 02, 2011
I have to be honest here and say that I've never been a Stryper fan. I know, I know. . . Blasphemy! Maybe I can redeem myself by letting you know that my husband has been a long time fan.

And as I've said before my philosophy of good music surpassing all genres rings true once again. 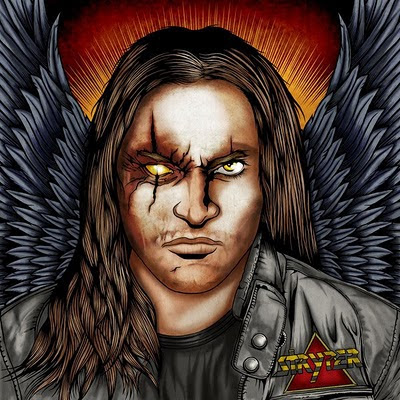 I would listen to this album over and over.

First of all, I LOVE the name of the album!!!! THE COVERING???? That is a FANTASTIC name for an album from a group that has made living and playing for Christ their main focus.

And the fact that they've chosen to "cover" some of Rock's greatest songs in history is, what I believe, the 2nd reason for the naming of this LP as opposed to the first.
But. . . I could be wrong ; )

I think covering another artist or band's songs can be a hit or miss kind of thing.  Whether the songs sound the same or are different, my opinion is you gotta make it your own to make it worth my listening.


MAKE IT YOUR OWN

One of my favorite remakes that sounds so much like the original AND current is "Abracadabra" by the Steve Miller Band redone so well by Sugar Ray in 1999.

Dylan's "All Along The Watchtower" was rearranged by music icon, Dave Mason and he strongly encouraged Jimi Hendrix to record it. And the rest is history.

Stevie Wonder covered The Beatles' "We Can Work It Out" making it so funky. I totally love both versions and feel I'm listening to two different songs that just happen to have the same song title and lyrics.

Some others worth mentioning. . .

Muddy Waters' " You Shook Me" covered by Led Zeppelin

Of course, there are soooo many others I could mention, but I'm sure you all get my point.

I had no preconceived ideas of what to expect from this album.
Boy, was I pleasantly surprised!

Not only is the integrity of every song kept but they stand on their own. Which is exactly what Stryper was going for. And I'm so glad they did.

Track listing is as follows as well as who they covered.


It's hard to say which were my favorites. I liked them all!!! But I will admit I did play Immigrant Song, Highway Star, Breaking the Law over several times.

I would love to see Stryper do an MTV video of Highway Star, using the old 80's technology, format and style. This song has that classic 80's sound to it and we all know that the 80's are making a comeback.

No matter what your taste, what your faith, or for the staunch Stryper fan...you gotta give it a listen! You will not be disppointed!