Casey Abrams Gets an Earfull From Ellen 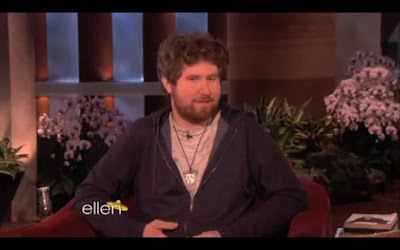 I have to be honest and say that I’ve never really been a fan of American Idol. So I’ve have blown myself away for watching from the beginning of the 20. What an exciting season this has been!

Although I am impressed with all twenty, from the time I’ve watched, my favorites have been Casey Abrams and James Durbin. And even though, I’m not a Country lovin’ fan, Scotty has proven that he can do “it” right!! 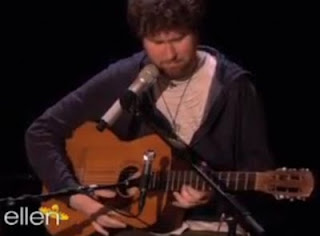 Casey, you are truly an

all around musician who

has proven that he

has what it takes to be

NOT an American Idol,

but a Jazz Great!!


And AGAIN. . . Ellen, who has great tastes in music, invited another 'up and coming' legend to her show. . . CASEY ABRAMS!!!

What you see is what you get!

He is what he is!

And he seems to want to share his love of music with everyone he meets.

And today was no exception.

My sister, who is also a musician, has been telling me for the last couple of years that the melodica is going to make a comeback. 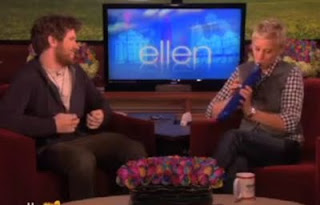 Well thanks to Casey. . .he has brought it back by using it for his A.I. audition and then presenting Ellen with one on her show!


Today, Ellen and Casey both twittered about some special news that Casey would be hearing, so of course, being a “Casey Fan,” I couldn’t miss the show.

They talked about the A.I. finale and that he’d be on there to sing.
Ellen asked if he’d be singing with someone and he’s like, “oh, of course!”
She started asking him who that person might be. He said he didn’t know.

Ellen says: "I'll tell you who you're singing with,"

"I know and I'm going to tell you right now."

“No, you're going to be on the finale on 'Idol'

and you're singing with JACK BLACK!" 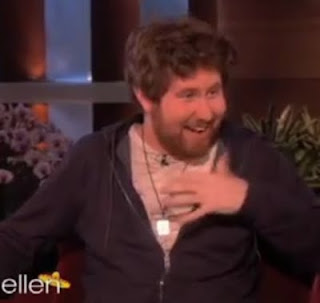 
After this fantastic news, Casey gave a beautiful performance, with A.I.’s musical director, Michael Orland at the piano, setting up Maroon 5’s “Harder to breathe” and Casey playing his classical guitar at the intro 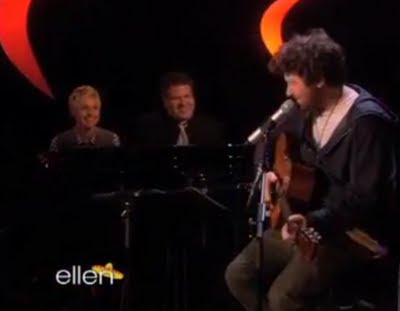 Ellen & Michael were his backups!! Good job, you two!!
Between the laughs and smiles, it was so cute to watch! 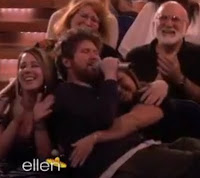 Of course he totally woo’d the crowd with his charming, growly self.


One fan, I'm sure hasn't taken a bath, let alone washed her forehead of the kiss Casey planted on her!! 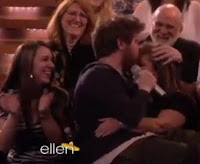 And if I’m not mistaken, I think those were his parents sitting proudly in the audience.

I’ve played this video over and over.

Casey is so amazing!! Can I get an AMEN?!

Even Meatloaf who was the next guest after on Ellen said Casey was one of the best artist he has ever seen on American Idol. 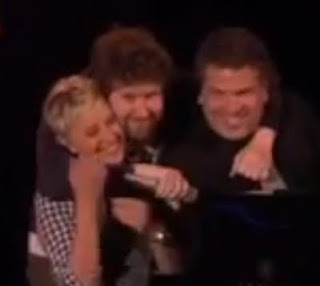 I have to agree!!

Talace said…
AMEN! I understand that Casey may not have been "The American Idol" material because his style isn't everyone's cup of tea; but there is no denying his raw talent, magnetic personality, and intuitive musicality. He is one of those artists that you can sit back and enjoy with full confidence that you will be entertained, surprised, and left wanting more. Casey Abrams never fails to bring something new and relevant to the stage, a quality anyone can appreciate. To add even more to his appeal is his personal and at times dramatic connection with the audience. I'm sure the lucky women to receive a peck (or more) on the cheek have no complaints and neither do I!
May 6, 2011 at 9:10 AM