LO'S PICK OF THE DAY - “Give Your Love” by Koinonia from the album; “More Than A Feeling” 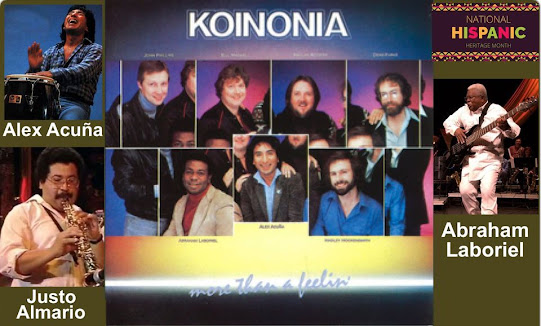 Let me just begin by saying that there isn’t ONE PERSON on this album that doesn’t deserve to be mentioned. They are all heavy hitters and legends in their own right. 😃 And man, do I love the projects they have been on. That being said, this Pick is based on honoring those who are Hispanic / Latino respectively and their contributions to music.

Released in 1983, spear headed by drummer; Bill Maxwell and Abraham Laboriel, this album was the debut by some guys who were studio musicians that got together in 1980 and later, decided to make an album that encompassed all the music styles they loved while professing their faith as Christians. Okay. . ..they were NOT just some guys!! They were some of the best that music had to offer and still do!!

How their name was chosen can only be told by Bill, himself; "The name Koinonia (meaning Fellowship) is a Greek word from the New Testament. Leave it to Abraham Laboriel. He speaks four languages fluently and only he could come up with a name that no one could pronounce!” HAHAHA

Although Koinoina was the house band for The Baked Potato in North Hollywood, CA for several years, “More Than A Feeling” was released in Europe and to their surprise, the Scandinavian countries was their largest fan base.

Because Justo Almario wasn’t officially with Koinoina at this point, and I chose this album because it was my first Koinoina album which I still have - on cassette, mind you, I wanted to choose a track from here. And surprise surprise, Justo solos on one of my top favorites; “Give Your Love!” WOOHOO! And what a solo! So soulful and rich.

What a slamming tune! Written by Abraham and his wife Lyn, this song has so much grit and funk, all while carrying a message that we need more than anything today. Abraham THROWS it down on this track. He’s a monster. Love that low fuzz he’s puttin’ out. Alex of course, brings his Latino attitude on this with percussion and drums.

That synth heard at the beginning is done by a non-band member, good friend, fellow brother of the faith – the incredible Michael Omartian.

The vocals done by Abe, Bill, Hadley, Harlan and friend; Contemporary Christian Artist; Russ Tuff, were constructed in a way that anyone listening would want to join in this sing-a-long while groovin’ and swayin’.

Although the album was produced and engineered by the incomparable Bill Schnee and recorded at his studio, responsible for some of our greatest records, there were other engineers on this, including; David Schober, Jack Puig who are also part of some of history’s amazing records.

Another engineer on this project is also a Latino; Dan Garcia. He has worked on so many of my favorite album by Bryan Duncan, Crystal Lewis, Michele Pilar, Michael Ruff, The Manhattan Transfer, Amy Grant and so many other great artists and bands.

For me, and other Christians looking for music at the time that was released as early Contemporary Christian Music, Koinoina was a pioneer in a genre that has grown to include so many great bands and artists that have easily crossed over to what was referred to as “secular music.”

Back then, I just wanted to listen to my favorite styles. But what a pleasant surprise to find music in my preferred style from great musicians who shared my faith and just wanted to put out some good tunes that even tho was released as Contemporary Christian was for EVERYBODY.

Abraham, Alex & Justo, although you did not choose to be Hispanic / Latino, you have shown honor to your people and the world by giving back with faith, hope, love through your contributions in music.