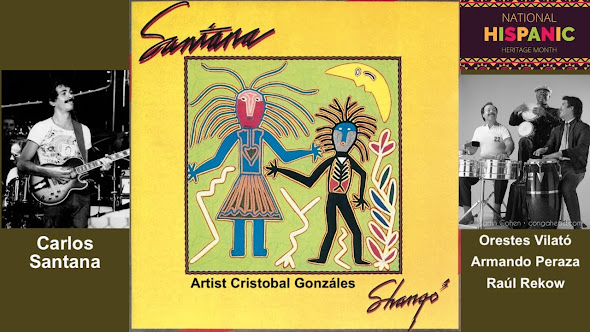 Trying to choose my last Pick for this week, was so incredibly hard because there are just so many artists/musicians/bands out there that I have loved and grown up with.

But this one is important. When I think of the band; Santana, I go back all the way to my childhood, growing up in East Los Angeles / San Gabriel, California.

Families gathering for a wedding or quinceañera and always, ALWAYS - everyone would get up to dance to "Evil Ways," "Oye Como Va," "Black Magic Woman" and more!

From the time Santana came out in 1969 and myself being only 8 years old, I've literally grown up on this band. Memories of my older brother and his "Pachuco" buddies hanging around listening to Abraxas or Santana III stay with me (Dang! I still have the 8-track)!!

The years go by, the band continues with a few member changes, but I’ve continued to groove to this band.

Shangó isn't considered a Santana top album, but honestly, I don't really listen to reviewers. I choose what I like and find that it stands on it’s own.

That being said; “Hold On" isn't really a Latino sounding tune like the early Santana years. Carlos has evolved and grown. It's more West Coast in my opinion. If it weren't for the percussion crew on this, it would sound more like a soft rock tune.

From the moment the song begins, it's all percussion provided by the Santana Dream Team, coined the "Cubanettes;" Armando Peraza on congas, Raúl Rekow on bongos and Orestes Vilató on timbales, with the rhythm being accompanied with the deep feeling piano by Richard Baker and at beat #1, it just gets you swaying.

I have to mention that these guys are legends!!

Orestes Vilató begins to appear in the mid 1960’s with legendary Bugaloo master; Ray Baretto, known for his hit; “Watsui.” He also worked with Cal Tjader, Fania - All Stars and so many others before working on Santana’s “Zebop!” In 1981.

Now Raúl is EXTRA special for me. Raul was with Carlos’ brother; Jorge Santana’s band; MALO. Their debut album is a staple in any California Chicano’s home. And I’m sure beyond. Their hit “Suavecito” was adopted as the “Chicano Anthem.”

I no longer have the LP, but I have the cover that belonged to my brother. This album was so important to him and his Pachuco buddies that before my brother left for the Marine Corps in 1972, they all signed (tagged) the cover, inside and out, adding their own flair of Chicano artwork. On the backside cover is a photo of a young teenage Raúl.

Shangó would be Raúl’s 9th recording with Santana. But he, too also worked with some incredible bands, including, Sapo, Patti Austin, Country Joe McDonald, Jason Mraz, Herbie Hancock, and again, so many others.

Back to the tune:
Alex Ligertwood's off the cuff vocals and haunting harmonies really turn me out!! So beautiful. His voice is so distinctive and rich.

Carlos always seem to be playing as if he is at a jam session. Everyone is sticking to the program and he just does what he feels. Total freestyle. I think that is what I've always loved about him. He is a legend, that is for sure.

"Hold On" is a well put together tune; produced by John Ryan, known for hits like; "Lady" by Styx, Pure Prairie League's "Let Me Love You Tonight," Animotion's "Obsession" and more.

Sadly, two of the three percussionists are no longer with us. Armando Peraza passed away in 2014 and Raúl a year later in 2015.

I honor these men with all my heart and say thank you for giving yourselves completely to create art and music that have made our culture proud and have united us all over the world. No matter what our culture or race are, music is what binds us together.
¡Salud!